Griffin and Sabine: An Extraordinary Correspondence

When I was little I used to love the 'Jolly Postman', a children's book by Janet and Allan Ahlberg about a postman (a jolly one) delivering letters to various fairytale characters. The story was sweet and illustrations lovely, but what I loved most was the fact there were actual letters inside little envelopes that one had to take out, unfold and read to continue with the story.

It is that interactive side to reading that first drew me to Nick Bantock's beautiful Griffin and Sabine trilogy - a sort of exquisite Jolly Postman for grown ups - a book entirely in correspondence. In truth, I first read them when I was too young - I stumbled across them in my parents' bookshelves and was drawn to the front cover. Consequently, I didn't wholly understand everything the books hinted at (but going back on them and reading them again has been inspiring) - but I adored the gorgeous illustrations (all Bantock's handiwork), the art form of the exchange of postcards, both sides shown to the reader, and the crisp letters folded inside envelopes.

It is, essentially, an enigmatic and artistic love story spanning three books, sparked when a postcard arrives from Sabine, to Griffin. She is a stamp illustrator who has lived all her life on a tiny Pacific island, and he is a lonely, disillusioned artist based in London. Mysteriously, she can see every stroke he paints, and every line he draws, and so on finding out his identity, writes to him to try and understand the phenomenon. 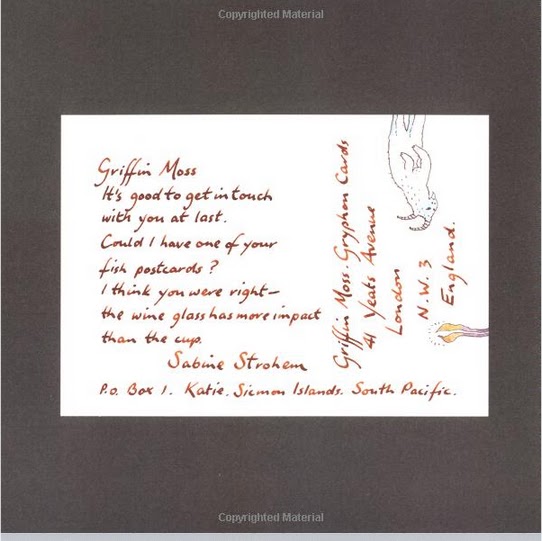 And so the extraordinary correspondence is born!

It is both a puzzle and a joy to read. I have only just discovered that he wrote a second trilogy following on from the first - the next three are definitely on my Christmas list!

Would you read a book like this? Or would you feel childish?

P.S.  J J Abrams has recently been involved with a book called 's.' which sounds like a similarly interactive reading experience. It's essentially an old, cryptic novel by a fictional author filled with handwritten notes in the margin, and with newspaper clippings, scrawls on napkins, and scraps of paper tucked into the pages. I am dying to read it- it sounds so interesting (though perhaps pretentious? But maybe that's JJ for you!). Here's the link.
Posted by Emma at 21:56 2 comments:

Allegri's Miserere came on the radio (Classic FM - great channel for studying!) yesterday and I was reminded of how beautiful it is. It really is the most peaceful music.

Have a listen - this is a version by the The Sixteen (an incredible choir led by Harry Christophers), but the Tallis Scholars version is also beautiful:


There is a lovely bit of history that goes with this piece. The Pope at the time it was written thought it was so beautiful that he decreed that it was never allowed to be performed outside the walls of the Sistine Chapel in Rome. This was the case for over 100 years - the manuscript was never published - but it became legendary. Then, in 1700 a 14 year old lad (Wolfgang Amadeus Mozart) visited, heard it twice, then later wrote it down from memory. Apparently the original Miserere was simpler than the one we know today (as this little documentary shows) but still an impressive feat!  After this, the Pope at the time congratulated Mozart on his musical talent, and the Miserere Mei was shared with the world.

Email ThisBlogThis!Share to TwitterShare to FacebookShare to Pinterest
Labels: How interesting..., Music

Everyone loves peonies; they are so romantic and overwhelming. This amazing Etsy shop by Kari Herer sells the most exquisitely dreamy photographs of flowers.

Have a look - which is your favourite? I like this one, and this one too.

Season of Mists and Mellow Fruitfulness

Autumn is by far my favourite season. As time rolls towards October, the evenings close in, and the air becomes chillier. There's nothing I like more than wrapping up in woolly layers to go outside, and to feel the pink sting of cold air on my face. Autumn is the time of hot chocolate, cinnamon, soups, firelight, falling leaves. The trees are still in their summer greenery at the moment, but I am looking forward to the riot of colours to come (nothing like the spectacular New England fall colours, unfortunately, but still golden and stately).

Anyway, there is something deliciously cosy about staying in on autumn evenings (with a cup of mulled wine, perhaps?) and an enthralling book. Here are a few on my wishlist:

I love tales of the war, and this biography about a young woman who signed up for the Wrens (because she liked their hats, naturally) and was drafted into the secret services seems just my cup of tea. I can't even imagine her bravery - especially when she had to tell her family she was just working for the Ministry of Agriculture and Fisheries. A fiction 'version' of this that I have read recently is Jackdaws, by Ken Follett (author of the amazing Pillars of the Earth and World Without End), which is about the heroic female spies parachuted into wartime France, whose bravery was barely acknowledged because the medals they deserved were not, at the time, awarded to women.

Also on my wishlist is Life After Life by Kate Atkinson. I've read so many good reviews for this, and the premise is so intriguing - the chance to live a life again, an infinite number of times, changing the path taken. I can't wait to read it.

Finally, although I've already read this, I had to recommend it to you. A love of Jane Austen (or at least, familiarity with Pride and Prejudice) is a must - it is such a joyful read. Simply put, it's Pride and Prejudice below stairs, but in reality it's much more rewarding than that. There are enough glimpses of the real P&P novel to make the Austen-lover smile, but it's actually an entirely different story of the incredibly difficult lives of the servants of Longbourn, the Bennets' residence, who, to be brutally honest, do not care a fig for the balls, Bingleys or romances occurring, and instead are exasperatedly calculating how long it will take to remove those six inches of mud from Miss Elizabeth Bennet's skirts. Of all the books I've read this year (and I've read a few), this is my recommendation! Let me know what you think!

P.S. You know what I'm like about book covers, so I couldn't resist: the American version is infinitely superior to the British! Click here to have a look. It's so much more simple, elegant, and regency than the horrendous British purple cover, which seems more brash and Victorian to me...